In 2007, WCSS was involved in the following projects:

Background – Western Canadian Spill Services (WCSS) conducted an exercise on Slave Lake, Alberta on June 19th 2007, as part of our field testing and continuous improvement program. The field trials were conducted as a result of a needs assessment program coordinated through the WCSS R&D Committee that included the following components:

The objective was to test whether two parallel sections of 30 cm WCSS standard river boom deployed parallel and one meter apart would be as/or more effective than one string of larger diameter lake boom in deflecting oil into a recovery system in choppy waters.

To test this, two 70meter sections of river boom were placed within 1m of each other and parallel to the waves on the lake. The waves were approximately .5m high when the test began and personnel in response boats monitored the condition of the water upwind, downwind and in between the sections of boom. Visual observations showed that there was a definite calming of water between the two boom sections and a buildup of foam and water on the outside of the upwind boom. Unfortunately, the lake became noticeably calmer during the observation time period, but the observers agreed that using parallel river booms would definitely be advantageous in cases where larger diameter lake boom was not available. More testing in rougher water would be advantageous. 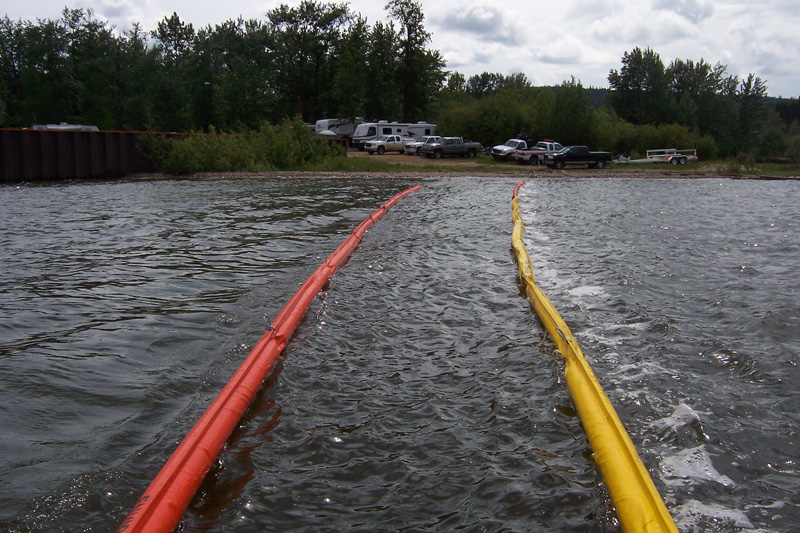 The objective of this test was to determine if boom could be effectively deployed by a boom vane out of a single boat and held in a position to herd or corral surface hydrocarbon. A boom vane is a device for deploying boom in rivers and other waterways where the river’s current against the boom vane’s special vertical wings launches itself out into the current with the boom in tow without the assistance of a boat and in-stream anchors.

To test this, 100 meters of 60 cm lake boom was tied onto the back of a boat, and the other end was attached to the boom vane and then to the back of the boat. As the boat advanced forward, the movement created a simulated current and caused the boom vane and boom to sweep out sideways from the boat. Once the boat speed had stabilized, a recovery “U” was created with a front opening of about 15m. This was very successful in creating what appeared to be an effective containment and recovery strategy for towing the oil to a shoreline recovery area. One drawback of this type of containment and recovery was that it takes a powerful boat to tow the system and we found that we would require a minimum of an 18ft Aquadek response boat to safely do the work.

The same test was repeated using a boom deflector. A boom deflector is a device which can be attached to boom in various locations along the containment system in a river to help move the boom into the current, keep it straight and minimize or eliminate the need for shoreline ropes.

The boom deflector did not work because, in order for the boom deflector to sweep out sideways, the tow speed required would have been too great to keep oil from being lost out the closed end of the boom. We have concluded that using boom deflectors would not be an option for towing boom in a lake environment. 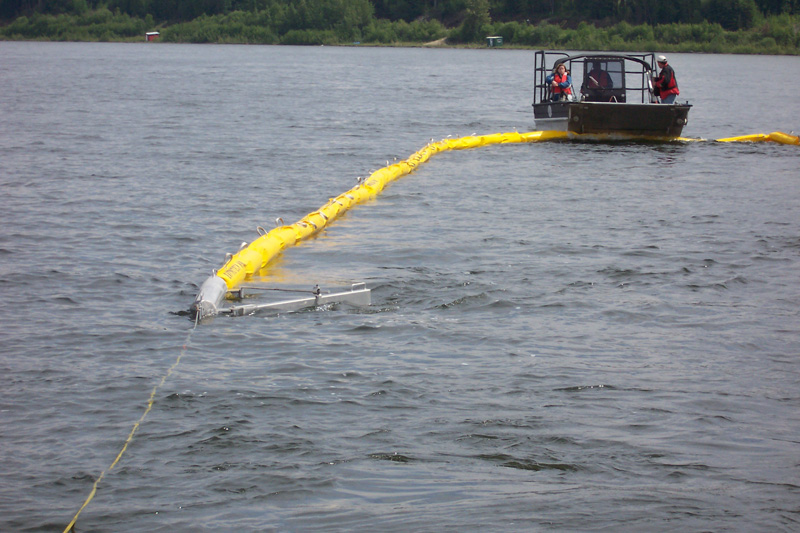 TESTING THE SAFETY AND OPERATION OF A CAPSTAN

One of the ongoing issues that boat operators and crew have to deal with is pulling anchors and associated equipment out of the water after an exercise or spill. A capstan is a rotating machine used to apply force, or assist in this operation. In this field trial a boat with an electric capstan was utilized. The boat has a ball actuator on the floor and a toggle switch beside the boat operator. Operation of the capstan is quite simple, all that is required is to make a couple of wraps around the barrel of the capstan with a rope, leaving room at the end, and then activate the electric motor. The test was done on an anchor which had been set into the muddy lake bottom and was very difficult to unset manually. The capstan was very successful in unsetting the anchor and pulling it up to the side of the boat so it could be retrieved. In summary the exercise attendees believe that this unit merits some consideration for installation in at least some of the WCSS boats.

IDENTIFYING OPTIMUM SPEED WHEN TOWING BOOM WITH PRODUCT ENCAPSULATED INSIDE

Once the oil is contained within a containment and recovery system, it needs to be recovered. In some cases a drum skimmer or other skimming device can be deployed and in others the oil would have to be towed to a shoreline recovery area. Tow speed is critical, because if towed too quickly, the boom tends to flatten out on the back end of the recovery system, allowing oil to pass underneath and be lost in the process. Also, as oil builds up in the back end of the system, it will flow over the top of the boom and be lost. In this specific case using 60cm lake boom, a speed of ½ knot was the maximum speed that would keep the oil inside the recovery system. 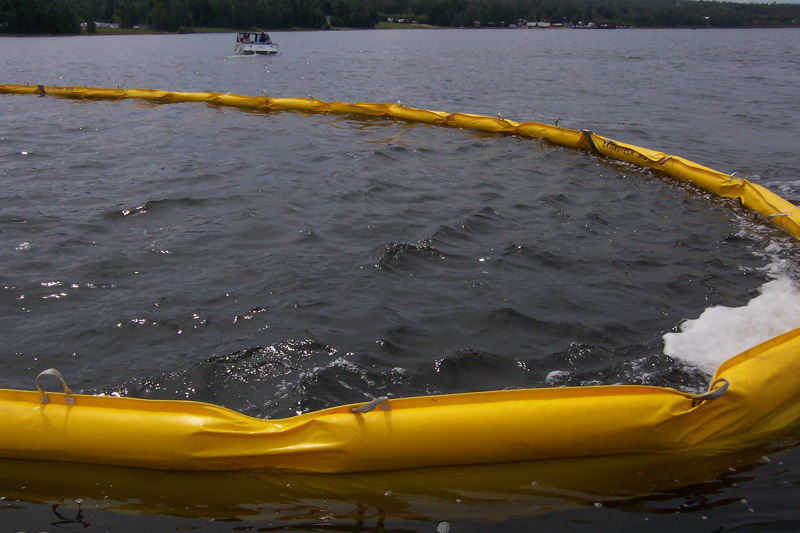 Anchors and their suitability in various conditions have been tested by WCSS in the past and our experience is that there is no single anchor that is suitable for all situations. During the field testing at Slave Lake, there was difficulty in getting rake anchors, disk anchors and Danforth anchors to set in the bottom of the lake in the area we were working. We did not investigate the type of conditions on the bottom of the lake but would assume they would consist of small cobble and sand. Some of the field trial participants advised that they had some success in previous spills in lakes using the standard two pronged boat anchor with stabilizer bars to stop it from rolling over in the water while being set. WCSS has some of these anchors in surplus and will test them at a later time.