WCSS maintains a small annual research and development budget that is used to find solutions for gaps that have been identified in the upstream industry’s spill response capability. WCSS R&D projects are oriented towards oil spill technology development and field implementation of new equipment and techniques for oil spill containment and recovery; particularly spills into fresh water environments. The following is a summary of recent projects:

It is recognized that hydrocarbon sheen is prevalent during oil spills in surface water and that it is difficult to recover hydrocarbon sheen. Although this small volume of oil is generally not seen as causing a significant environmental problem, it can create the perception that the spill containment and recovery operations aren’t effective.

WCSS is currently testing several commercial sorbents that distributors claim to be effective in the recovery of hydrocarbon sheen removal and is also testing some common organic materials (i.e. straw, hay and peat moss). Tests have been conducted in porta-tanks and on open surface water on Syncrude’s lease in Fort McMurray.

To date the following observations have been made: 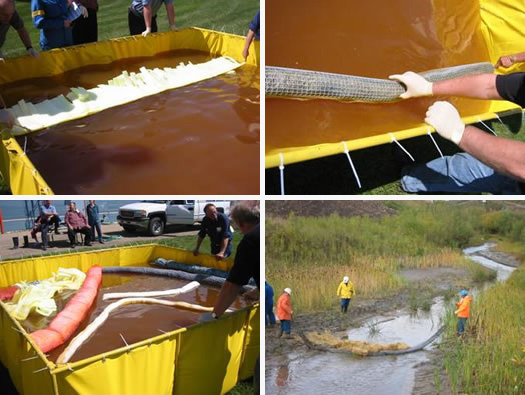 There have been past incidents where spilled oil, particularly high density oil sinks into the water column and is not easily contained with the standard spill response equipment (i.e. boom) that is found in most spill response units.

WCSS conducted two field trials to evaluate the use of fine mesh fish net and a sub-surface containment fence (report attached in pdf file). In general WCSS is not confident that an effective assessment tool or containment and recovery tool/ technique are available for spills of this nature. It is recognized that commercial divers would likely play an important role and that the method of oil recovery would be dictated by site conditions. WCSS will monitor progress in this area by continuous review of international research and development work and case studies of incidents where sunken/submerged oil is an issue.

The purpose of the water safety project is to determine personal protective equipment that should be used at oil spill equipment deployment exercises and during a spill response where a water hazard exists. In addition to the assessment of PPE, WCSS developed water safety guidelines that are currently in draft form. 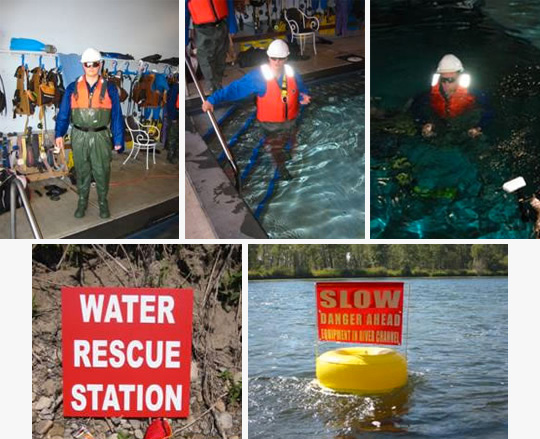 WCSS has been experimenting with containment and recovery techniques in rivers with an ice sheet for many years. Some of the recent developments include: 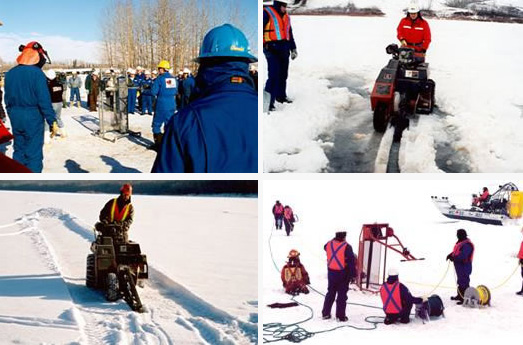 There is general consensus that the ice slot can be much narrower than the standard 2/3 meter width and that a series of 15cm wide slots (approximate width of ditch witch chain) would be effective in containing oil migrating under the ice. This theory will be tested in 2005/2006. We are also investigating other types of ice cutting equipment.

Members of the Area Y Oil Spill Cooperative designed and successfully tested a right-angle inverted weir. The idea came from a spill case study from Russia. This weir differs from the standard straight piece of pipe that is inserted on an angle in a dam in that it has a 45degree angle that is deployed on the upstream side of the dam.

Aqua dams were tested at several Oil Spill Cooperative exercises and shown to be effective for some applications as a spill control tool. The aqua dams that were tested are from Aqua Dam and Diversion Ltd (www.aquadam.com).

WCSS has been testing air spargers as a containment 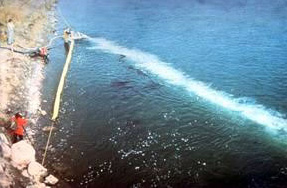 device and as a tool to improve water quality for a number of years. We are currently assessing the use of air to redirect surface oil to a recovery area and as a tool that can be used in shoreline clean up work.

This product consists of two layers of thin plastic that comes in a roll about the size of a paper towel roll and is fed through a loop resulting in a plastic helix. The product was tested at several Oil Spill Cooperative exercises and shows promise as a portable/quick containment tool in flat water with little or no current.

CONTAINMENT AND RECOVERY IN FAST WATER

It is generally accepted that an ideal oil spill 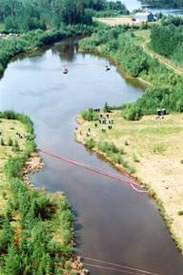 equipment deployment site for the purpose of containing surface oil migrating downstream is in slow moving current that is fairly flat (i.e. no rapids) and has adequate depth to float boom and weir or drum skimmers. Unfortunately these ideal conditions do not always exist and it may be necessary to deploy equipment in fast water.

WCSS began testing boom deflectors in the late 1970’s and an Alberta based spill specialist (Envirotech Nisku 780-352-5132) has been working on an improved design of boom deflector that is gaining popularity in North America. The deflectors are connected to containment boom and act as a wing that pushes the boom on an angle towards the recovery area.

WCSS was involved in the first field test in North 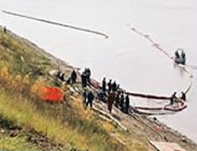 America of the Swedish boom vane (e-mail info@orc.se), a device constructed as a cascade of vertical wings mounted in a rectangular frame. The boom vane is anchored on shore with a single mooring line and when deployed pulls the containment boom into the water channel without the use of boats, in stream anchors or fixed installation. The boom vane also features a control rudder that allows for speedy and effortless retrieval from midstream. WCSS currently owns two boom vanes, one located in Edmonton and one in Fort McMurray.

WCSS has developed a containment system that is

similar to an offshore vessel of opportunity. The system is comprised of a barge with a boom sweep that is connected to the vessel (surplus WCSS barge). The unit will be tested in 2004. The WCSS R&D Committee also plans to test the use of air to deflect midstream surface hydrocarbon to a recovery area.

In-situ burning is the oldest technique applied to oil 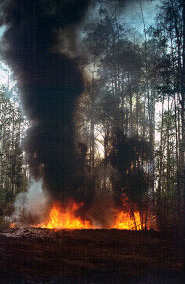 spills and is also one of the techniques that have been explored in scientific depth. Only recently has in-situ burning been used on a broad scale. This is because burning, although easy to apply, does not appear to be as desirable a course of action as physical recovery. Burning oil on water is not intuitive and thus many people did not pursue this course of action. Recently, the successful use of in-situ burning on the Deep Water Horizon spill in the Gulf of Mexico drew attention to the technique and left a very positive image of burning.

In-situ burning has been used to deal with land spills for many years. Of the few documented cases, most were successful and resulted in little environmental damage. 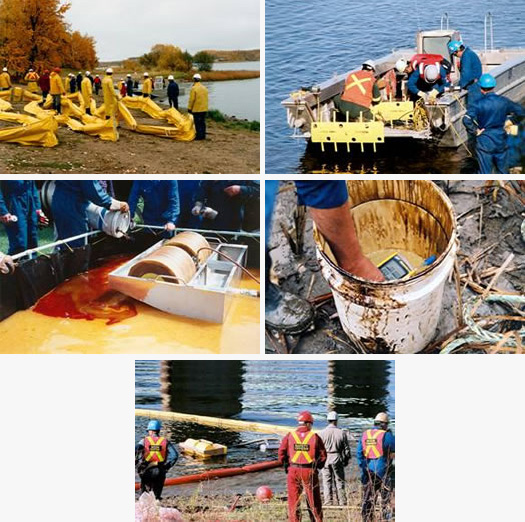